The Rest of the Quarter

We managed to get around the French Quarter and spend time looking and talking with merchants. If you haven't been to New Orleans, the city looks somewhat normal on the surface. If you have been or really do some exploring you will discover just how empty the city really is.

We went to the River Walk and wandered through all of the shops. About 1/3 of them were actually open. This place was trashed after the storm so any sign of life is a warm welcome. Some of the larger shops like Eddie Bauer have closed up and do not plan on returning. We saw the Sensation which is the cruise ship that the NOPD personnel are living on. 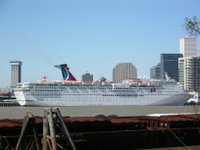 This is a view of the Sensation from the West Bank taken on 2/11/06. If you look at the glass building towards the front of the ship, you will notice the roof windows are still unrepaired.

After leaving the River Walk we walked down Decatur and looked around. My brother-in-law showed me the special permits from the health department that restaurants have to get before opening. Seems that they take the flooding and lack of electricity serious. What was suprising was the number of restaurants and bars that did not have them up. Being 2 weeks from Mardi Gras, you would think they would want to open.

We cut over to Bourbon St. via Jackson Square. No artists, fortune tellers or panhandlers. Weird. For a Saturday at 6:00pm, it was a strange feeling. Not one tourist shop had a visitor in it. We spoke with several owners and they stated they were open because they had to pay rent. Overall they stated business was dead. Even the small bars only had 1 or 2 people in them. Some of the larger bars had small crowds but you could tell they weren't tourists. Mostly workers taking the afternoon off and getting smashed. 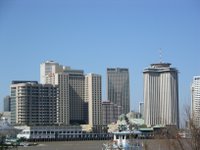 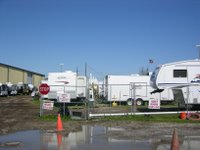 This photo is one of the many trailer parks all over the state. This one had RVs as well as tent trailers. It is behind Blaine Kerne's Mardi Gras World
Posted by Paul at 9:31 PM No comments:

We drove over Franklin Avenue towards the St. Bernard Parish line. They were working on the levee breach. We were quite surprised to still see barges and smashed houses still untouched. Below are two photos showing the area near the breach. 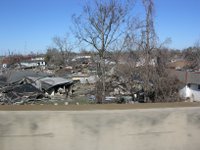 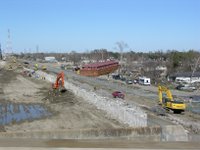 Note, you can see a chain link fence keeping people away from the repair efforts.

You would think by now the barge would be gone.

As we drove towards the parish line, we noticed there were people gutting their houses. We couldn't see water lines in this area. I wasn't until we came across this house that we realized they must have been completely under water. 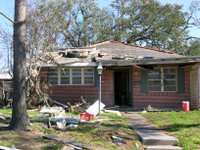 The tires and debris on the roof really hit home. The entire street looked like this with the exception of the homes where people had begun cleaning up. Again, all of these photos are from 2/4/2006 not a month after the storm. You can see the grass is finally growing back. One of the early complaints was that there was grey everywhere. It is still in the streets, driveways and sidewalks but the lawns and plants are starting to come back. 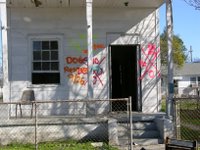 This house has been checked 4 times. The X is painted each time the house is checked and there are date and unit numbers as well. This one apparently had a dog in it. This was a little eerie as you could see notes on the house like, 2 dead cat, dog footprints and other random notes. This house was checked almost a month after the storm. The reality is that many houses still have not been checked. They found a body as late at 2/2/2006. I'm sure there are a few more lurking around.

There were also some tent cities. Some tents, some tarps held up with wood. FEMA is providing water and MREs to these people but it didn't look like the best living conditions. It would be nice to have the media really focus on the rebuilding effort or lack there of. It is less than 100 days to hurricane season and we have tent cities and debris everywhere.
Posted by Paul at 8:48 PM No comments:

If the Rich Aren't Rebuilding What is Everyone Else Doing?

I spent the last two weekends in New Orleans. If you weren't familiar with some of the areas, you would think that things are getting back to normal. It is not until you talk with store owners or go to the heavily hit areas that you realize how little has been done.

We went to Lakefront first. This is the part of New Orleans that borders Metairie and Lake Ponchartrain. There is a large neutral ground down West End Blvd. that was a large grassy area. A garbage dump size pile of tree trunks and other tree debris is piled up as well as tons of abandoned cars that have been towed there. They don't know what to do with the trees. They want to burn them but are worried that the embers from the fire will set the now dry flooded houses on fire. Who knows what will happen to the cars. They have flooded cars all over the city.

The water level on many houses in this area was up to the 2nd floor. Many of the houses clearly have foundation problems and the streets are getting large potholes. We went to the actual lakefront where the marina and many restaurants are. Much of it looks like it did the week after the hurricane with boats still on levees and in parks, power lines still down and none of the restaurants close to open for business. 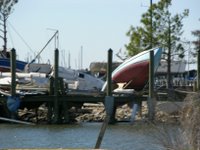 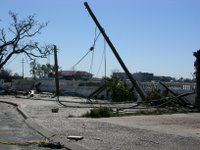 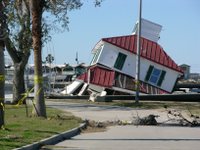 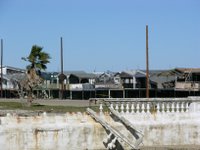 I think what is most amazing is that these pictures are not from a week or two after but are from 2/4/2006.
Posted by Paul at 8:33 AM No comments: